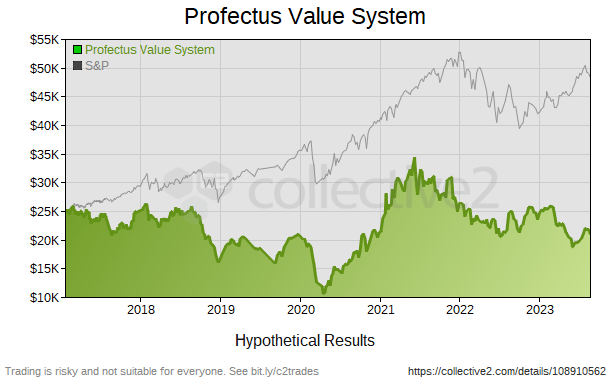 It will be a while before you see any noticeable performance in this system either way, but I figured I should explain the logic behind it:

This system follows a bottom up approach and invests in mid and large cap stocks based on a variety of value factors. It’s inspired by the general concepts discussed in books by Benjamin Graham, Joel Greenblatt, and Seth Klarman. The holding period is several weeks to several months. Positions that are sold are immediately replaced with new positions.

Profectus Value System has no relation to my other system, Profectus System 1. There is no shorting, market timing, or hedging. I expect it to fall with the market during bear markets, and rise with the market during bull markets. When using a value approach, I’d rather stay invested and ride out the big market drawdowns, because at these low points you are owning pieces of cash cow businesses at larger than normal bargains (this is why Buffett doesn’t mind the drawdowns as well….but this only applies to value investing). The goal is relative outperformance over the long term (this is probably the only main point where I diverge from Klarman).

Let me know if you have any questions.

I appreciate that even though you’ve had great success with your system, which has had great returns in the short term, that you’ve launching a long-term value oriented system. Best wishes to you!