“Strategy Manager C2 Score Workbench
Collective2’s Quant Team is continually analyzing strategy performance. We try to determine which statistical factors, if any, are predictive of future strategy performance. We use a proprietary scoring algorithm to assign a numerical score to every strategy offered on the C2 Platform. We call this the C2 Score. We then rank strategies by C2 Score.”

The current ranking for strategy FUTURES CME-NYMEX is #281 (Age Strategy 77 Days).
For a higher position in the ranking, the system only needs time (120 days).
This means that money management options are relatively among the best.
I will be glad to see you among the subscribers. 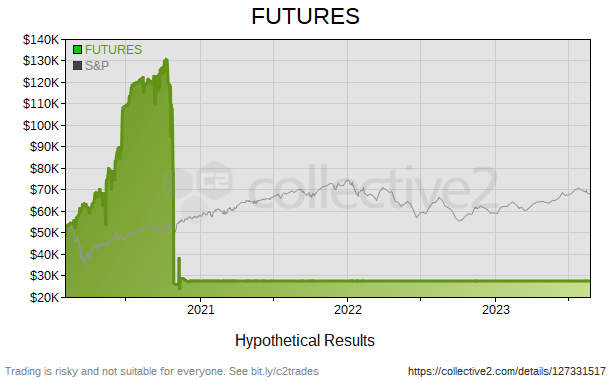 Steady profits after almost 700 trades, very reasonable drawdown (overall and after each completed trade), no evidence of averaging down or martingale, not bad at all Alexey.

Most C2 users usually wait until a strategy is at least 3 to 6 month old before subscribing. In my opinion the number of trades is much, MUCH more important than the “age” of a C2 system.

Because some systems trade very infrequently and may generate, say, 6 trades in a year (or even less). The problem is that it is almost impossible to judge a system after only 6 trades or less, no matter how good the drawdown and the ROI are. Mathematically and statistically, we need at least 30 trades in order to draw any meaningful conclusion about any system.

More importantly, a good ROI and drawdown after a lot of trades is a sure sign that a trading system has indeed a mathematical edge (assuming there are no averaging down and martingal-ing activities). A large number of trades will also increase our confidence that its profitability was not due to chance.

So while the age of a C2 system is important, the number of trades is even more important.

averaging down and martingal-ing activities

Absolutely not, like I said in a previous post, the true definition of leverage is NOT value of the position divided by trading capital.

The REAL risk is always your stop, and only your stop (in % of capital).

There are tons of C2 systems with “low” leverage but huge drawdown after each completed trade.

And there are C2 systems with “high” leverage but very small drawdown after each closed trade.

Nothing against that C2 leverage metric but it does not tell the whole story, far from it.

I am not trying to pick on you but I honestly think you should reconsider your measures of risk. Stop losses are a HUGE help I agree, but how can you tell a stop loss is being used on each trade?

I would be interested to see a comparison of max drawdowns of systems with leverage under 3 and over 7. I doubt there are many strategies with leverage always under 3 that have drawdowns worse than 50%. I bet with larger than 7 you have plenty. For example, I would have always called Just Forex Trades high risk. However, using your metrics you wouldn’t have called it high risk.

I think the grid would have too much survivor ship bias to give us what we need to really test that though.

I would be interested to see a comparison of max drawdowns of systems with leverage under 3 and over 7.

I did a research on the Leader Board C2 systems. I took the first 30 systems (it’s time consuming to check them all) and noticed that 60% of them did use leverage that exceeds 10, on some of their trades. The maximum C2 leverage used was 27.88 for one of the top ranked C2 strategy (again I only checked 30 systems).

Now draw your own conclusions about the value of this metric as a measure of risk.

That said I agree with you about the survivor bias.

I noticed most of your trade days are within your -$1,000 daily limit and most drawdowns are less than 1.5% - in fact, most are less than 1%. Nicely done.

Can you explain these trades and why the drawdown percentages and dollar amounts were so high?

It is better to let such drawdowns be in the first month of trading than in the last.
But I can’t say that I am the perfect trader.
Sometimes I go hugging the market.
But sometimes the market does not want to be friends with me.
There are different situations, but I see that my trades are bearing fruit.

Thanks for your insightful and comprehensive reply - you took each trade and explained the scenario surrounding the transaction. I especially appreciate that, rather than try to mislead or explain away a bad trade, you simply acknowledge a mistake (specifically, trade #2) and how you intend to avoid it in the future.

But I can’t say that I am the perfect trader.

None of us are!

Sometimes I go hugging the market.
But sometimes the market does not want to be friends with me.

Haaaaa!!
Best of luck and much success to you going forward!

I invite all my subscribers to my channel in the Telegram messenger.

Channel for investors. Managing your brokerage account through the service collective2.com/details/127331517

What observations would you make about your 5/12 - 5/14 trade? A lot of risk taken, and a large drawdown, on that one trade…

Hi,
At this time, another trade was opened, which was in profit. This balanced the overall position. But when the balance was not in my favor, I decided to close the losing trade.
And after that, the second trade quickly went up.
Therefore, it is seen that equity quickly recovered.

What is your understanding of the differences in these reported statistics, and what is your summary of intra-trade and closed trade drawdowns?

I used to at least understand why there is a difference in the display of data. But for me, the results are more important. For example, subscribers really do not like big drawdowns and stop-losses, even if they are made using the trading system. In this regard, I am adjusting my system for shorter drawdowns. Therefore, there may be more short stop losses. In general, my system makes money and I intend to continue my trading on c2.

After the complete failure of my strategies, I took a break.
Everything was connected with the desire to show high profitability.
The increased risk led to total losses.
Now I am back to active trading again.
My new strategy is https://collective2.com/details/132690186
Now my trading is based on complete risk control.
I review my threads on Twitter.
https://twitter.com/trade_investors
If you are interested, see the pictures of trades on Twitter.

For every follower of my twitter account, I will send a free subscription coupon for one month.

why not, his records show great success.

Today the first subscriber connected to my autotrading account and got the first profit.
Not much, but a profit.
Trade - entry into the long after the reversal.
Exit - too early, but with a profit. It is better than too late and with a loss.
Attached is a picture of the trade.
All pictures of trades can be found on my Twitter - https://twitter.com/trade_investors
https://collective2.com/details/132690186

I made the subscription cost $5.
This is so that you can set up a paper trade with your risk parameters and test my strategy online.
In addition, I guarantee everyone who subscribes to my strategy for $5 until 12/31/2020 to keep the $5 subscription price until 04/31/2021 (for 3 months of 2021) on a personal coupon. 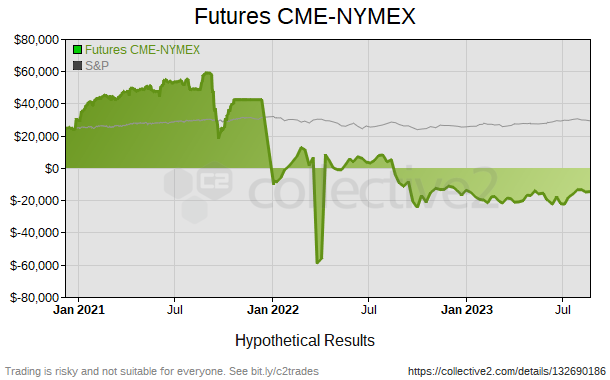