ARK 2 strategy in the huge lose 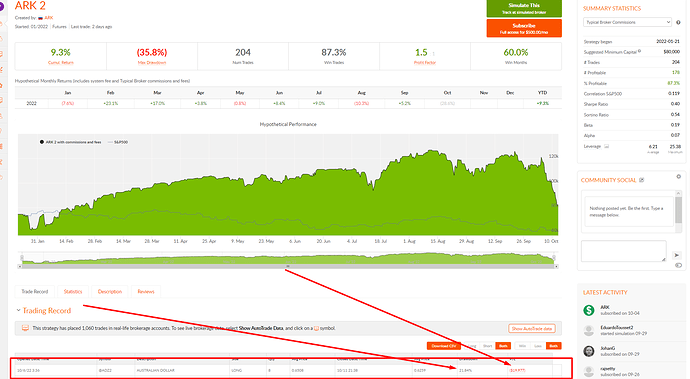 All marti grids fail - eventually…amazing how many still get sucked into these dangerous systems still, but the temptation of double-digit growth months is too much for many I guess. To add more credibility to C2 ( as every fund collapse should be considered as a failure) platform, it would be worth checking the reviews, and include an additional caption that those views have been validated as genuine or not as the case may be… by checking the IP addresses being used.

This is what this guy “Michael” does. Creates a gently rising equity curve by using a martingale like approach, but eventually it collapses like all of his systems in the past.

This is why he is not TOS. No capital at risk, just makes fees off of investors until his systems blow up.

He then creates a new profile with identical systems, names them something else and in a month or two he’s back in business with new victims, er, “investors”. Tried to warn folks 6 months ago. Oh well.

I’ll be curious what he names his new systems…

See above. PFSignal, Medallion, Delta… the Ark1 guy has a ton of old systems that did the exact same thing. They blow up every time. Then he creates a new profile under some new name and starts again. Haven’t looked but he probably has a ton of subscribers who don’t realize this. Would stay FAR away. Good luck.

Good old buddy Michael got to it again. Consistency!

This is the trading style which maximizes his income. 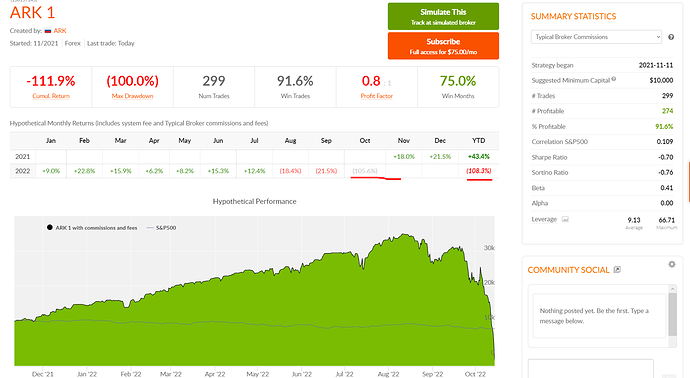 Honestly it’s a stain on C2 that they keep allowing this kid to come back on, with a new profile, hide his previous returns, and lose money for investors all over again with nearly identical systems.

It is incredibly easy to be successful using marti grids for weeks, months or even years before their eventual collapse - seen it time and again on other platforms as well as C2 - which is what makes social trading platforms so dangerous; and those least familiar with the dangers of short term trading systems are being exposed to ruinous losses as a result. It is easy to assume many are in control of their investing, but all too often greed overtakes reason, which is where some form of leverage control or alternative protection measures should be considered.

IMHO there is a strong demand for martingale systems in overall trading/investors community.

You are absolutely correct, even total newbies can quickly notice that this or that trade leader is using a martingale system.

And yet they stick with the strategy, sometimes for months, fully aware that these types of systems will usually generate devastating losses at some point in time.

I guess some traders DO like martingale systems, after all.

I guess some traders DO like martingale systems, after all.

Yep, steady income month by month now. It will fail in the future, but maybe not, hope not, sure not, it can’t happen to us.

Yep, steady income month by month now. It will fail in the future, but maybe not, hope not, sure not, it can’t happen to us

That’s another problem with martingale systems, because betting against them can ALSO create huge losses in the short term, even though, ironically, they all fail at some point.

And they all fail because :

A: Continually betting against the market is a terrible idea. In fact it never works, trust me on this one.

B: The market will ALWAYS have more money than you, so it can withstand ANY drawdown, while you cannot, even if you are the richest man on earth.

When a trader is using a martingale system he is, in essence, betting that the market will run out of cash before he does.