How do you view backtested drawdowns

I realize I am not providing loads of details with this example, but I am curious to hear opinions. These are the backtest results of a system I have been working on. Assume that you feel the backtest does model pretty well what the past performance would have been had someone been trading this.

Would such a large drawdown in a backtest like this make you:

I just added it to the original.

Did you reinvest profits or this was fixed size position?

Reinvesting. It assumes a mix of various assets that change based on common trading techniques. But say it sees stocks as bearish it will allocate to bonds, gold, crypto, cash, etc. Assets had various limits to how large of a percent they could comprise of the backtest depending on how large the asset is/how volatile it is. For example, crypto and gold could not be more than about 1/4 of the portfolio no matter how bullish the signals may have been on either of them. Whereas the allocation to US stocks and or bonds could be about 3/4 when all bullish.

It depends if the drawdown was within the range of what I was expecting as likely. If so not a problem.

My first thought was that system is broken. However, based on the log graph, it seems equity is getting back to the norm (straight line) after period of high profits. I would (probably) look further if equity will return back to 15-20% dd level before making any conclusions.

Seems reasonable. As hard as it is to make a good call with the full context of the algorithm rules, I know it must be harder to say without it.

The algorithm primarily only goes long on assets that have a long-term history of being appreciating assets. The two most allocated to assets are stocks and us bonds, with leverage of up to 3X.

When I look at a simple 50/50 stock bond rebalance with 3X leverage over the same period we have this:

When I look at a simple 50/50 stock bond rebalance with a 3X leverage over as far back as portfoliovisualizer allows for free users we get this:

Because the strategy is heavy stocks and bonds, often rotating to bonds when stocks do poorly, I interpret it as a good time to start the algorithm. However, there is no doubt that part of me is worried that it is no longer viable. Seems only natural to be a bit worried about it.

I am actually trying to answer similar question.

Year or so ago (maybe almost two years now, time flies) I was looking into Tactical Asset Allocation strategies which were generating nice returns with relatively low DDs by that time. Just tested one of them (backtest ended on 2022) and the picture is similar to what you are showing above - 2022 showed max historical DD/loss.

Question is the same as yours: get in hoping for bounce back OR consider TAA as broken approach.

What types of assets was it rotating between in your situation?

I don’t think all TAA is broken. Only TAA strategies that rely on inverse correlations between bonds and equities. That relationship may no longer be in place.

In this particular case the are SPY, PID (tried to replace VINEX) and TLT.

Do you mind to share example of TAA with different approach?

You def want the last 6-month results to be positive. These last couple years markets have changed quite a bit. If you have settings the are profitable for earlier part of the year CONGRATS but you want to see an edge in the last 6 months.

The key is finding strategies that use assets that do well in an inflationary bear market. For example, commodities, short term treasuries and the USD.

use assets that do well in an inflationary bear market

Easier said than done, because you will never know when an inflationary bear market will start or end.

That’s what trend and momentum indicators are for. It’s not rocket science. The hardest part of TAA strategies is sticking with them through a full market cycle. Most people quit during the bull market when they are under performing.

When you say it may be broken
and no longer in place, are you thinking temporarily like a few years, decades, etc.?

I think there have been periods like this before and will again, but I don’t think they last for decades.

The positive correlation that we saw last year between stocks and bonds that hurt the 60/40 portfolio and many TAA systems could easily last a decade or more. There was positive correlation between 1966 and 1998 for example. If inflation and rates have put in secular lows, then the correlation will be more positive than negative going forward. Obviously I have no idea if this is the case but I would certainly have a plan in case it is. 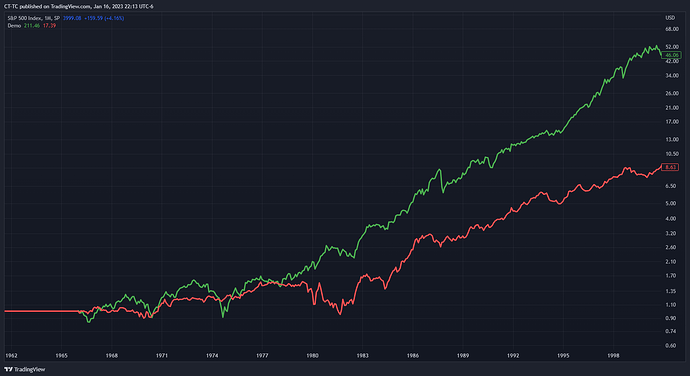 I guess if I were to summarize my thoughts I would say I just don’t want to make too many changes based on this year being really bad. Using stocks and bonds together wasn’t super helpful this year. There are several periods on this chart such as Nov 68 to Jun 70 when a mix of these two assets was terrible too. But then in 72-75 bonds were more helpful. Stocks saved the portfolio in the early 80s when bonds flopped. I obviously have no idea what will happen this next year or decade, but I plan to still invest in bonds and stocks and will look more closely at bonds when stocks are not trending well etc.