Can you guys check out my strat

Theta collector with options while using forex to hedge

You have had an incredible few days. Congratulations! No one on C2 has ever had a strategy that survived for more than 3 years while using this much leverage (285 daily average). It is just too easy to have massive drawdowns or even 100% plus drawdowns with this much leverage use. That’s just my opinion though. You can of course do whatever you wish and people can subscribe to whatever they want. Good luck!

For reference if you scan for strategies that are 3 years old at a minimum and have an annualized return of 12% or greater, the largest daily leverage use is 11. Either no one has tried using more leverage or none have survived. Well I have seen plenty use more than 11, which in my opinion is already plenty risky.

I agree with you the leverage is to much but its part of my strategy, the less I have to stay in a trade in the forex markets the better.

For reference if you scan for strategies that are 3 years old at a minimum and have an annualized return of 12% or greater, the largest daily leverage use is 11. Either no one has tried using more leverage or none have survived. Well I have seen plenty use more than 11, which in my opinion is already plenty risky.

You will also notice that in each case the market did NOT make a sudden and unexpected move against their “highly” leveraged position, these trade leaders were fully aware that their increasingly bigger losing position was devouring a significant portion of their trading capital each day, and yet they did nothing to stop the bleeding.

So these “high” leverage systems lost because the Trade Leader did not use a safe risk management protocol (a 3% stop for instance).

It all about the size of the stop (in percentage of trading capital), leverage has absolutely nothing to do with the profitability of a system.

It’s all about money management, leverage has absolutely nothing to do with the problem.

We must also keep in mind that a system can lose money simply because it has no edge, regardless of leverage or even money management.

Leverage isn’t the only thing but it is very important.

Take for example the S&P 500 day traders benchmark of buying S&P 500 at the open and selling at the close. This alone isn’t a good strategy but has historically made money compared to just holding cash. Though it isn’t a great system it is profitable.

Now apply a 3% stop loss for each trade.

The stop loss for each trade remains at 3% and the entry signal, market opening, stays the same. The only thing that changes is the leverage and how frequently the stop gets hit before the end of the day.

In no way do I recommend any of this as a strategy. It is simply a demonstration of why leverage levels are important. Too much leverage can take a profitable system and make it go broke. Obviously there are better and more profitable methods out there but leverage can also destroy those systems if too much is used.

Ok, sure, let’s take your own example.

What is your “leverage”, according to you?

It will only make sense if you do the full simulation. Yahoo has free data for SPY going back to inception with daily open, high, low, and close. That and Microsoft excel is all someone needs to run through the simulation.

Are you saying one share of SPY? One contract etc?

Are you saying one contract?

What is your “leverage”, according to your own definition of leverage, in this example?

The margin required and the C2 leverage factor are not synonymous.

Very good, now we are getting somewhere.

In other words, way too much “leverage”!

Sure, but these calculations totally ignore the fact that my stop is still 3%, in other words even if I buy 8 contracts the most I can lose is still $300!

That’s the point that I am trying to make : “Big” leverage has nothing to do with risk per trade.

If the stop is in place, it is market hours, and there is enough liquidity in moments of crisis then yes the most you can suffer per trade is dependent on where your stop is.

Even if all those assumptions are granted, as they were in the simulation I suggested, leverage alone can make a profitable system unprofitable. This is because we are concerned about cumulative results of many trades. Leverage can change what percent of trades are profitable because small fluctuations can lead to stops being hit when they wouldn’t be with lower leverage use etc.

I highly recommend going through the simulation I suggested.

Leverage can change what percent of trades are profitable because small fluctuations can lead to stops being hit when they wouldn’t be with lower leverage use etc.

It’s 3% of CAPITAL, not 3% of the entry price, so this idea that the market will somehow hit the stop more frequently (due to “high” leverage) is only an illusion.

By the way, here is an example of a “highly” leveraged losing system.
(I selected this strategy because it is no longer active and the Trader Leader is no longer offering any system, his last login happened 41 months ago). 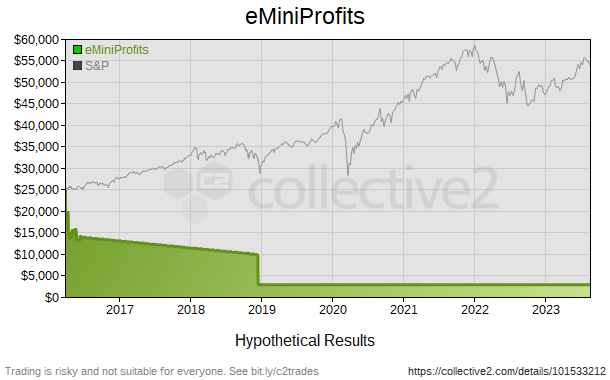 And also notice that this system lost because the Trade Leader did allow his trades to go south big time (more than 61% maximum drawdown on just two trades).

Did the market make a sudden move against his position while he was in “high leverage” mode ?
Nope.

In fact it took weeks and weeks to create these huge drawdowns.

Again, it’s all about risk management, not leverage.

I disagree. I was assuming 3% of the NLV already not the trade.

Should we assume that you already simulated that open-close S&P 500 system with different stop levels and/or “leverage”, then?

If so what are the results?

EP_Capital, terribly sorry for these off-topic comments, and we wish you the best with your new trading system.

I’ve run similar but not this exact one. If you don’t want to or don’t know how I can later.

If you don’t want to or don’t know how I can later.

To tell you the truth I am already busy making adjustments on my own systems.

But yes, I would love to see your results later, if you are up to it.

Take care for now and thanks for these interesting comments.