IGL CTA-Looking for your suggestions on invest Strategy "IGL CTA"

Was discussed toward the end of this forum thread:

Can someone tell me if this is a "Martingale System" C2

Can someone tell me if this is a “Martingale System” link here: https://collective2.com/details/100859365

I’ll reiterate my thoughts - big first couple trades on VIX, Got lucky. Then just trades a couple e-minis so not to damage his track record graph & stats. I see this alot. If he had failed with the first couple trades he could have just started a new system some other time, maybe under a new name. No one would notice.

Now if another Volatility event happens and he nails it much like he did the first, without major DD’s, then I’d be impressed. Until then I’d wait. Plus he is charging about $6k a year, so you’d better have the capital to minimize those fees on your return.

Not TOS either. So anything they say in the description is taken with a grain of salt. Just IMO.

While this is not a debate I can tell you I took a risk and did subscribe after talking with them. I have made over $16400 in last 40 days at 100%. This is a day strategy only that does not hold over night. He cuts losses quickly. Typically in trade for about 2 hours only. He does add to winning positions as well. While there are no guarantees for me personally I have chosen to subscribe to day trading strategies only not wanting to hold anything overnight. So far me this has been a good one for me with good communication.

Thanks Gregg. But there is no communication with me so far. Let me wait and see.

I’m not a subscriber or even a simulator; I can’t see if leader has been in one trade for 12 hours or not, but it doesn’t look that way from the jags on the equity curve. Looks more like leader is getting a short signal from some algorithm and keeps trying it and stopping back out again, trying it again and stopping out yet again. Tiny little losses in a row, much like his few earlier losses, only this time they’re accumulating into something almost meaningful (yikes, -4.7%, massive massive DD!). If the equity curve is updating, looks like trader might have finally changed into trying long positions instead. There’s only a 24 hour delay on seeing the trade record, so we’ll find out tomorrow.

Be aware he is on line today and has not responded to any of my messages today. I have made really good money with this system and cut losses earlier on the trade but not looking good. All other times he responded great but not this time. I took a chance on this one even though it was less than 6 months old and overall i am still ahead several thousands i just wish it would of worked out for this system. Save your money and look at another system.

At a loss of $14,276 in the open trade. I guess he has decided not to respond and old overnight. Its out the window for day trading !!

The strategy has been in a hole for almost 2 years.

@cct1: no, you’re probably looking at the wrong strategy (bad link in the thread above), this strategy (IGL CTA) hasn’t been around very long. 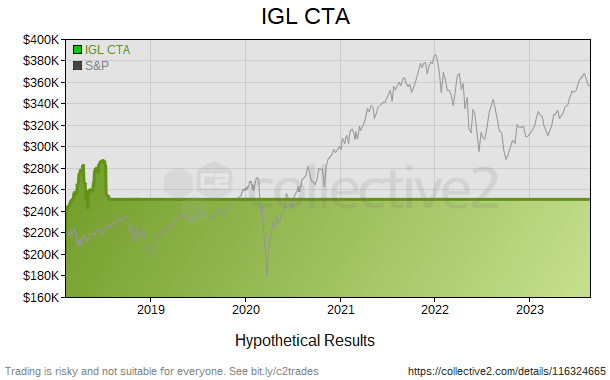 most of his wins are an ES point or 2, looks like he refuses to take a loss… that must be how this one got away to the tune of 18K. Good Grief

That trade on Apr 16 was not too different than others he’s placed before; he added more to the losing trade twice, but not quite doubling down on the initial trade, before taking the loss. That one loss (-15.7k) wiped out the previous 25 or so gains, giving a big boost to his average loss size. Not a horrible drawdown or anything, considering his equity trajectory, I think it just adds a dose of reality to what the equity curve will look like in the longer term.

35K of loss in the last two weeks. I’m glad I didn’t subscribe to this strategy!

Always allow a strategy at least 6 months of track record to see the behaviour of the strategy. If large drawdowns in some trades are showing up then beware.

Always allow a strategy at least 6 months of track record to see the behaviour of the strategy. If large drawdowns in some trades are showing up then beware.

Agreed. And yes he did double down on those losing trades. Just some light martingale so far, but not what I wanted to see.
Be curious if we see more VIX shorts with a move up in Vol at some point. To @AlgoSystems point, always give it at least 6 months to see something like this.

What happen with this strategy? It had a nice performance until last month and now became PRIVATE. Any comment from current subscribers? This model was 100% TOS.