A new plan and a new gal

As i said previously in earlier posts : [quote=“PropTrader, post:4, topic:9428”]
And yes we will not just fade a certain system for a long period of time hence traders may have a good year or 2 before losing money
[/quote]

Long streaks of losses are not avoidable and we are fine with it , sound MM and being vigilant is key , and certainly trading “traders performance” isnt like trading the market itself .

Thats totally a niche in itself . I wouldn’t call it an experiment or a test system as i have been watching how traders trade for a decade .

don’t need all the explanations. starting building up that track record and let the results speaks. If the numbers are there I don’t mind joining.

You are right TT3 , however subscribers like to join a system which they understand how it operates , random systems drive subscribers away . Plus other members did raise some valid concerns here so i had to answer even if it was just a brief answer .

How are you finding these losing traders? On C2?

How will you fade their trades? Auto trading or manually? If manually, your trades will always be later than the signal provider

I’m also curious where one finds a willing and constantly renewable batch of consistent losers who all have a statistically worse than random consistent performance, because as mentioned many times the vast majority of individual traders who are discretionary are simply being blown out by over-leveraging, random negative outcomes, and slippage and commission costs. The more under-capitalized the faster the story ends. On a related note I have done a lot of work where I found something mechanical that is consistently terrible, and figured hey just reverse it and make money, only to realize after real world slippage and commissions enter the picture, it just isn’t viable (although would be making the spread and with some HFT type capability…).

if you’re looking for failed systems. here’s the latest system to take a bath. 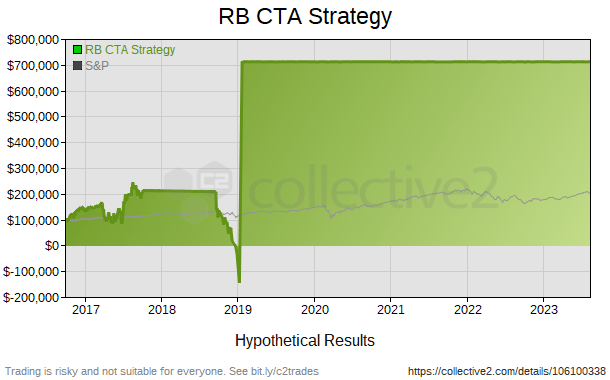 No not necessarily at c2 i wasn’t specifically talking about c2 traders . Anything goes , internet traders , real life … etc . And its not hard to find them .

How i fade them : manually ofcourse , we are not going to just inversely automate a system that would be a bad idea . Will i be late ? maybe but that isn’t necessarily bad , and if it was i may skip the trade if i want to .

I wonder whether the best group to go after is strategists whose strategies have just rolled over, starting to do badly. Often they have a strategy that works well in one environment, which then performs badly in another.

Correct , with no exceptions traders start making worse decisions when they are in a DD .

What makes you immune to same mistake when you are in a DD?

VerticalTraders wrote : “I’m also curious where one finds a willing and constantly renewable batch of consistent losers who all have a statistically worse than random consistent performance”

Believe it or not but the average retail trader wins more than 50% of the time, but still loses in the long run!

This article is common sense for random efficient outcomes, when you don’t cut losses your win% goes up and your loss size vs. win size also goes up. Guess what most retail traders do? Yep they hang on for dear life until (if?) the trade goes green or until they can’t take the pain on the loss side…

If you read this article and run out and start playing 1:1, your win % will go under 50% (at least after counting spreads and/or commissions). Now what? Money management is very important when you have a winning approach to begin with, if the approach is random or worse, then it isn’t going to cure the problem…

Doing some research I think people may find arbitrary stop loss settings can be harmful, trend followers have been finding this out for quite some time now, because the markets they operate in have become very noisy. So there could be an argument to be made in certain markets on certain time frames, that certain stop loss settings could actually be so bad as to be profitable to take the other side of (for now…). Now that everyone is piling on mean reversion trades (just look at the volaility systems on this site…), I wouldn’t be surprised if in the near future trend following models all of the sudden become profitable again.

“Money management is very important when you have a winning approach to begin with, if the approach is random or worse, then it isn’t going to cure the problem…”