A new plan and a new gal

I’ve been trading for a good decade , tried many systems that i lost count of , one thing for sure or rather 2 things

1- If you earn the spread - buy at the bid sell at the ask - then you have an edge , think algos and market makers , however this cant be realistically applied here to autotraders live accounts .

2- More than 90% of traders lose money eventually , so why not fade them ?! And here comes our new system Weekly Pay , we are going to fade retail traders , discretion will be applied and tight bid/ask spread low commission markets will be chosen .
Traders have big losses and small profits which means for us our losses are going to be small , as i’ve never seen a trader that holds a profitable trade for ever - which is going to be our losing trade - . That being said sound money management will be applied here and diversification is key , meaning we should rotate and fade a group of traders not just a single one . 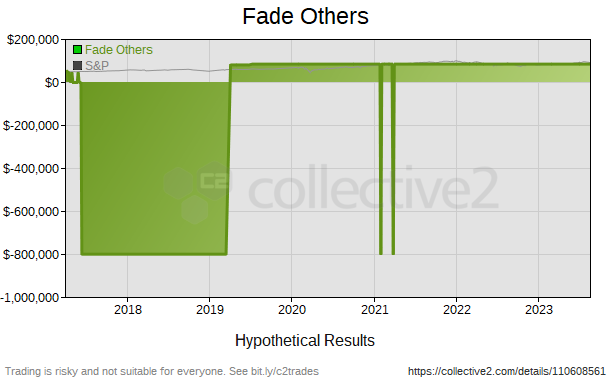 Fade Others - trading strategy on Collective2

I lost count how many times i correctly predicted a system/trader failure , whether in this site or other sites as well , it is like predicting a certain stock will drop heavily , these stocks should be shorted - these traders should be faded - .
But again we need sound risk management even when we fade traders , as there are no guarantees that we will survive , thats why we shouldn’t over leverage , shouldn’t blindly fade a certain trader for ever … etc , and here comes the experience .
But the main principle still has merits , 90% of traders lose money thats a fact .

Is this thread ment as discussion or advertising? I´m confused.

In case you want some input I would recommend to only do that stuff on scalping systems which are highly leveraged because those tend to have the shortest life span. You don´t want to loose against another system for 2 years or so after all. Generally though I wouldn´t use other traders as contra indicator, that approach is just to vague for me personally. However, I wish you good luck, it´s an interesting experiment.

Infact this strategy doesn’t work well with scalping systems , and thats because of the costs and commissions , both traders end up losing money . And yes we will not just fade a certain system for a long period of time hence traders may have a good year or 2 before losing money , and long term trading systems are out as well .

What will it be trading?

We will trade futures including FX futures . Will think about etfs/stocks later .

No evidence that a basket of systems will return 0% , how many systems joined C2 and how many survived .
We will fade traders and manual systems - have a trader behind the wheel - . Mechanical automated systems will not be faded .

I was referring to systems as a whole. When there is no edge, the system is random, with expectancy of minus the costs. What causes traders to lose more than that on random systems is factors such as over leveraging, scaling up after winning streaks and bailing out after a large drawdown etc. Fading a random system isn’t necessarily profitable.

If you have more specific statistics regarding C2, you are welcome to share it.

In any case, you need to consider volatility and resulting drawdowns - many systems that ultimately fail for one reason or another have reasonably long winning periods. Sometimes with returns of 100%, 200% or more. Fading that will be a tricky task.

Diversification can indeed help, except in cases / periods where there will be a correlation between the systems.

You also might also want to consider survivorship bias. Even the bad systems will generally not go down to zero. Trade leaders will just stop supporting them, since they too have costs. Once it happens you need to leave this system, whether you trade it or fade it. This means this selection process means more chance that the active systems will have some kind of positive return.

I’ll give you a personal example - I started two systems here to test specific concepts. That did not work out and I stopped them. No point to run a concept that does not perform to the ground. One with a cumulative profit of 8.8%, the other with a loss of -0.6%. Fading those not-so-brilliant systems would give you a loss, not a profit.

We will not fade a specific system until it reaches the ground . Nor we are going to fade just any random system and wait , it doesnt work that way , surely we have limited funds to operate from , and here comes the experience . At the end we will operate based on the fact that 95% of traders lose .

I see. Good luck then and looking forward to see your results.

Your are wrong in your logic.
Let’s say, in casino, 100% gamblers lose in long run. Will you be a winner if you bet against everyone of them?
No, you will also be a loser.
They lose because they have disadvantage to house.
You will be loser even you bet against them, unless you have advantage that house has.
In trading, advantage, we call it edge, come from:
1: arbitrage;
2. you know where is market going;
Unless you have edge, you will also be a loser even you trade against most traders.

I already addressed the commissions and costs issue in my first post . If a trader only loses the spread and commission then yes you are right fading this trader means a loss as well because we also pay commissions . However most traders lose more than the house edge check any trader and you will see , these types of traders we will be fading and again we will keep tabs on frequency , costs , commissions and slippage . Bottom line we are fading these losers which means a profit for us minus commissions and costs of course .

BTW big difference between trading futures and betting red and black , its not a binary situation when you trade the ES futures its not just up and down , its much more complicated than that and as i said earlier discretion will be applied and a trader behavior will be studied before fading him/her .

Again this system isnt your typical system with a 45 degree smooth upward curve like some of the new systems here at C2 .It is going to be bumpy but what matters to me that i am operating based on an edge , and if the edge equals the spread- house edge - then surely i am going to dismiss the trader and not fade him but if the edge is much bigger than the house edge then he is on my watch list to fade .

No one knows where the market is going , thats a fallacy , any event in the future is unknown unless you are an insider .

Of course people know.
In long tun market always goes up.
That is why people investing in long run always make money.

The issue is not about direction, but about capital shortage.

In casino, house advantage is not only the rake it charges to gamblers.
Besides rake, the other house advantage is that house has bigger capital.
Without rake, house will still be a winner in long run as mathematically the one who has bigger capital win in gambling issues.
So in a situation that house doesn’t charge rakes, gamblers will still be losers in long run because they are capital short. And if you bet against gamblers, you will be losers because you are also capital short.

In market, no one has enough capital to survive a long trend(when trend is against him.) That is to say, everyone has to cut loss at some point or he will be losing all his capital.This situation is similar to gamblers in a casino, that the gamblers always lose in long run not only because they are charged rake, but also because their capital is not enough to survive probability fluctuation.

Now you say if you trade against them, you will win. No, the truth is, you also need to cut when they are in a temporarily favorable situation, because you don’t know how long that situation will last 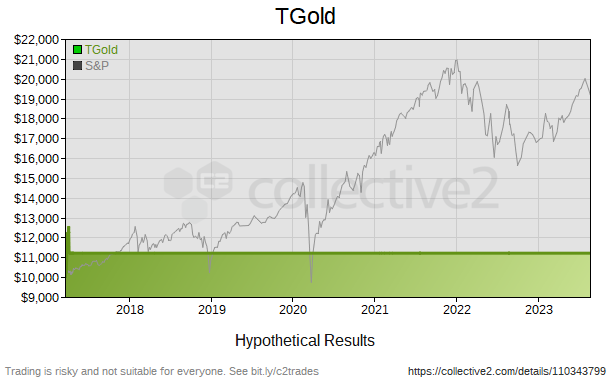 I dont have to cut when i am losing because traders - whom i am fading - cut winnings quickly = my losses will be cut .

All the points you have mentioned have been addressed in earlier posts .

90% traders fail not because they don’t know where is market going, but because they are capital short.
If traders don’t know whether market is going up or down, by betting randomly they still have 50% chance to win.So why only less than 10% traders can win?
Suppose you trade emini, if you judge market have 60% probability to go up later today, and suppose you are correct in your judgement, can you profit on this judgement?
No, you can’t.
Because you are trading with you whole capital.
Market has 40% chance going against you, and you don’t know how deep it goes against you. So you are capital short and you have to make stops to protect your capital. Now among your 60% winning chance , 30% are situation that market goes down first and then goes up later. You would be stopped out for this 30% chance so they are not your winning chance but you losing chance. So you lose on 70% of trades, yet only winning 30%, despite you are pretty sure market have 60% chance going your way. That’s why trading is so difficult.Because even you have high prediction rate, you have low winning chance due to capital shortage.
If you trade the other way round, you get even lower winning chance , unless you don’t make stops.
That means even if some traders are losers, if you trade against them, you could be losing more than them.

Your individual losses will be cut that´s right. But what MSimon says is that you can have to many losses in a row (winning streak for the faded trader) so you get into capital trouble. For your approach it´s crucial that your timing is about right when to “short a trader”. 95% winning rate doesn´t help you if the other 5% cost you near to all of your money. It´s really the same as with trading in general. It´s not about winning rates but about the combination of good setups with decent risk management. I´m not sure how you can effectively implement the latter unless your account is huge.
But I assume you don´t test that strategy with real money anyways so as I said it´s an interesting experiment and I wish you good luck.