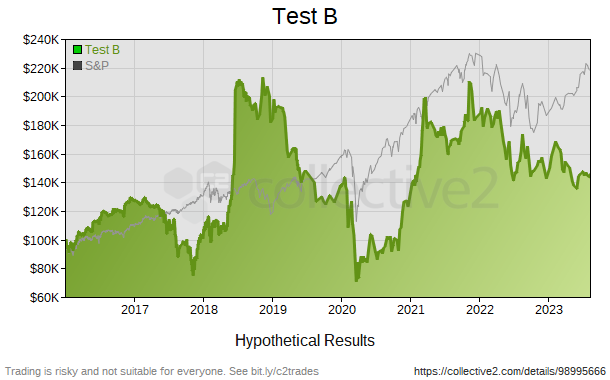 Test B - trading strategy on Collective2

The Federal Reserve now has a reason to save face and not raise interest rates going forward in the short term. At the beginning of the year analyst were predicting 3-4 rate hikes in 2016 after delivering the first rate hike in numerous years back in December. The Fed has failed to raise rates again since and their credibility has been on the line as fed speak has spoken to an economic recovery. Most would conclude that if the US was experiencing a legitimate recovery then rates surely would have risen more since December. The Brexit is a convenient excuse for the Fed to continue the easy monetary policy and failing to raise rates once again. Look for this language in the next Fed meeting to why rates will remain between .25-.50 for the short term outlook.

If the market remains week going forward in Q3 and Q4 and the market sells off substantially the Fed could come out with both guns a blazing with another round of QE as it looks to put out the fire the Brexit situation has caused in the markets. This weakness is fundamentally baked into the market and the Brexit could well just be the match that lights the tinder box. The timing of events could be interesting as the Presidential election is around the corner in November. We could possibly see intervention or non intervention by the Fed as a method to persuade the masses to vote for a particular candidate. This was the situation experienced in the 2008 election as the market was falling precipitously into November which swung the door wide open for an Obama win as the masses voted the then current party in control out and the Democratic party into control. The Fed will have a difficult time threading this political needle but the last thing they want is for the market to implode.

The S&P 500 is currently up 4.28% YTD at the time of this write up. The Valencia Select SP500 strategy is currently up 15% during this same time period. The strategy continues to perform as designed as it generates alpha on a Quarterly basis and outperforms the S&P 500 Index.