This thread should be for shout outs for strategies who stayed disciplined during the extreme volatility of recent days. I know in my discretionary account I made some bonehead moves and lost money I shouldn’t have, and it is good to see trade leaders who stick to their plan/system.

I subscribe to https://collective2.com/details/109496813 and while it is not the most attractive system on the leaderboard when looking at historic returns and risk, I believe it is a realistic system. The leader did a great job managing risk and sticking to his system, not averaging down or taking extra risk.

Sometimes the highest-flying systems on the leaderboard have risk that is hard to appreciate, and times like this help give a new appreciation to the systems that just grind out returns

I can’t agree with you. 18% drawdown through the month of Dec-end of January? That’s when everybody made lots of money. I don’t think you’ll find too many systems that behaved this poorly in that two month stretch thru the end of January 2018.

But I don’t want to just be a negative troll on this topic :). So I’ll give a shout out to Move North Stock Fund, which has held up very well amidst the carnage. Only down 7.7% in the month of February, well below his max drawdown. His equity is fully invested in a basket of stocks, all Longs, but selected (it seems) to slightly hedge one another. A year and a half old, 37% compounded annual return. Great find! Not all strategies are correlated to US equity exposure, so they may not have been profitable into year end 2017.

That is a good find – just bookmarked that one. Thanks for sharing.

Here’s one that I subscribe to that I’ve been very happy with: Performance was a little down November thru January, but he more than made up for it during the sell-off.

Another that seemed to hold up very well: 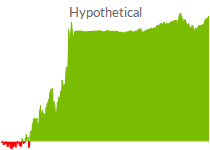 Hmmmm… you noticed that he closed all his positions around the same time on the 16th of Jan? And that he hasn’t been on the site in 11 days? I think he “held up well” because he wasn’t in the game

Hopefully that is ok.
Still up for a year. 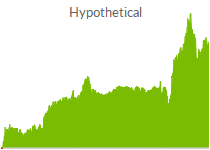 @MarkAmspoker yes, possibly, however the CVS download shows 160 open/closed trades but his strategy page says 162 trades. He closed something like 90 trades on September 7th as well so maybe periodic rebalancing.

An abandoned system or fortuitous timing?

Well, I think I’ll email him and ask! If it’s periodic rebalancing, then you’ve made a real find. I’ve never noticed this one before. 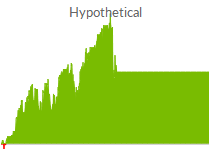