Phutures... its rise and fall as a potential good system

I think a mention of the poor money management for the system called Phutures is worth writing about. I would be 14k down in my account because this system does’t use internal stop losses. I placed my own stop at 7500, and that was too large. What is the trader thinking. He obviously doesn’t want to monitor his system and is only in it for the fees he can collect. Why doesn’t he trade his own system and take the 14k loss in value… A Good trader sees that the market has shifted because of an event such as the explosion in …was it Libya, that spiked the price of oil against the short position. If he would have had an internal stop loss on his trade he could have went long after it was hit. WHO in the heck doesn’t trade with real human input when a small or large black swan event happens and reverse the position. Also the Russian’s, China, and OPEC all agreed to extend oil production levels or cuts which supports a higher price in oil at least for now…all news which came out while he was in the trade. It is Stupid that he is still in the trade. Really its ok to take a smaller loss and not have such a “perfect” win rate. Especially when people like me can see through his trading abilities and see that its only a computer algorithm. You is not a professional and I believe he will lose many subscribers because of such stupidity. He needs to change and apologize to his subscribers and maybe he can save some of them. It really is insane to draw down so much on one trade. Its irrational. Especially since he could have reversed and went long to made up for the loss or even made some money. This trader will not respond to anyone’s emails and his statistics have crashed. Good luck ever attracting more people to his system…Anyone else feel the same…

I avoid systems with %win as high as that has. Almost anything with a %win rate over 85% or so is either adding to losers or waiting for losers to turn around, both strategies are dangerous and should be avoided. Just completely filter out systems with %win > 90% and you’ll save yourself a lot of headaches.

Yep…beginning to see the wisdom in your advice. Sometimes it just takes the life lessons of hard nocks to really understand. Thanks

I posted this in another post. The same exact post. It was about this system. You may not have read it so I’m only posting it again for that reason. It’s not the high win rate as you will read. It’s the risk control that was missing. I also gave some ideas on how to spot this early on. You can use these ideas for other systems you may consider. It’ll take you 2 minutes to do this little exercise and save you tons of money in the future. If you have read this already, I’m sorry for posting it again. It’s just an important enough issue that is worth posting again. I hope you find this helpful. I also believe there is no coming back from this. I can’t imagine any investor continuing the membership. An apology wouldn’t do justice. Below is the post. It was originally written a few days ago.

Ouch. I just looked at the system you posted. It’s not the win rate. I’ll give you some insight. This is only my OPINION. If I was the investor, this is the first place I would start. In trade record where you see all the trades, there’s a column for P/L and right next to it is a column for Drawdown. This is not the overall DD, it’s the DD on each individual trade. Scroll down and look at all trades including winners. If one single trade has more than 5% DD, it’s a red flag and really should be a no. If one single trade has a 10% or greater DD on one single trade, it’s an automatic no to subscribe to even if that strategy is a top strategy here. This little test will take you 2 minutes. The system you mentioned had a 19% DD on 9/8/2017 and a 23% DD on 9/13/2017 and was a top strategy.

Here’s why I believe greater than 10% is an automatic no. The trader is only interested in showing winners. If a particular trader is willing to take a 10% DD or more on his entire capital on one single trade, he’s not trading properly. He’s praying the market saves him. Especially if the trader martingales as the trade gets worse. That trade that had a 23% DD ended up a winner and is easy to overlook. That method works every time except the last time. This time the market didn’t save him.

If he has a very high win rate but uses a stop, that’s OK. If he has a very high win rate and does not use a stop, red flag. There’s nothing wrong with a high win rate alone and is considered favorable. This seemed to be a “top” strategy. So again, 10% DD or more on one single trade is an automatic no. These traders will martingale and everything else possible to show a winner. This is where the investor becomes disciplined and does some homework. Even if the strategy is the top strategy on this platform this rule should apply. Sooner or later, the market isn’t going to come back. If this trader had a 98% win rate and had risk control, that would be something. You don’t need that win rate to make money. Being right and making money are not equivalent. But there needs to be some risk control. Martingale is not risk control. Letting a trade ride for more than 10% of your entire capital is not risk control.

Again, stops are only my OPINION. But this could have been prevented with one. Is there not a point where the trader knows the trade is bad? And can’t a stop be placed at that point? Not an “emergency stop” that is set too far away. A stop where the trader is accountable for the leverage used to achieve the result you see.

The real red flag was the trades from the past with very large DD. When you see that, the trader is interested in keeping his investor base. At all cost. I would go through all your systems and take a hard look. This could save you a ton in the future.

You can trivially avoid most systems with that problem (before the drawdowns even happen!) by filtering high %win rates.

It seems like many oil systems don’t make it. They had a 98% win rate.

It seems like this is second time it happened. 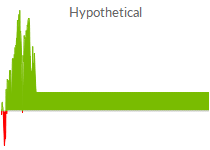 A high win rate isn’t the problem. There are systems that have long enough track records and new systems on this platform. The ones with longer track records can be analyzed. For those systems, a scroll through all the trades takes 2 minutes. More than 5% DD on one single trade should be a no and 10% DD on one single trade should be an automatic no. Investors can also open the details of the trade and see if the trader is adding more size as the trade goes against him otherwise known as the martingale. That’s a huge red flag. The main takeaway is the investor needs to do homework before investing.

For the newer systems, the investor can choose to wait for the track record to develop or the trader can provide a coupon for a free look. This is clearly a personal choice for the trader to decide. Some traders start a new system that haven’t developed the track record and refuse to offer any sort of trial. They may or may not be trading properly and hope to get however many investors they can. On the other hand, a coupon for a newer system allows the investor to see the system from the inside. They aren’t able to determine if a particular trader uses a stop or has any sort of risk management by just simulating the strategy.

This system had a long enough track record and so do many other systems. When this system was new, a trial would have allowed the potential investor to see how this trader was really trading. Clearly he didn’t use stops. After the trial is over and the investor determines there’s no risk management the decision would be clear at that point. This kind of trader wouldn’t have offered a trial because he had something to hide. He knew he was only taking trades to show winners to impress investors. He knew a trial would have reflected light on his activities.

I don’t disagree with you about finding high DD trades, it’s good advice. But I do disagree with you about high %win systems. There are really no high %win systems that are good systems IMO (again maybe an exception for certain options systems, but even then perhaps not). And it’s a lot easier to first filter for high %win then it is to waste time looking through all the trades on a bunch of systems that aren’t worth looking at. And as I said before, high %win will flag a warning even if if a high trade DD hasn’t happened yet.

If you still disagree, I’m happy to agree to disagree.

Thanks @DavidStephens for your response and being a gentleman. There are too many people on this forum that will jump all over you if you disagree with them. You can have your opinion and they can have theirs and they’ll still get offended if you don’t see it their way.

As long as you’re adding content that you believe is value added to the investors and traders and community here as a whole, I respect you for that. I may not agree with everything but I believe your heart is in the right place. You’re being genuine about your advice from my perspective.

Have a great weekend!

Thanks, and have a good weekend too!

Yep, I agree - he is only in it for the fees Very poor management by the system owner. I’ll never take this system seriously until he trades his own system - TOS (shares in the system’s profit & losses)