Since late October. BR Futures 42 trades and a 88% win ratio.

Yup, and with about 5x leverage. If you’d held a 3x index fund like SPXL for the same period you’d have done even better and had a 100% win ratio. Best of luck! 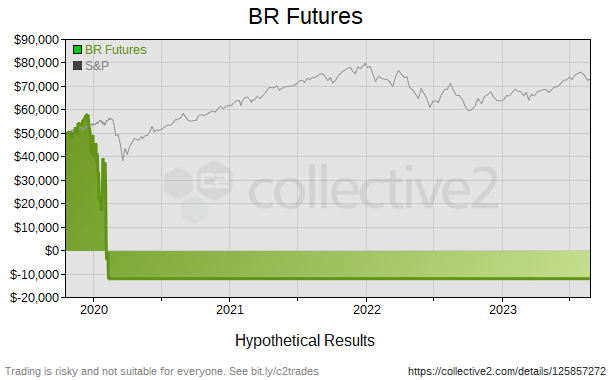 Sounds easy when Mkts go straight up for 7 weeks due to Fed, that won’t happen forever my friend.

That is my shadow area at C2, how come and why a strategy like yours does not have any followers ye? It appears to me great, not perfect, but great enough to start having some followers. Can you explain? Is it because:

I would say 1, 2, and 3. This strategy has only been profitable for a few weeks and the leverage is very high with a max at 18x. Have to give it time to prove a strategy is profitable over the long run and in different market conditions.

LejeuneB,
Clearly everyone is a genius in a Mkt like this that goes straight up do to Fed. That will not last. Over time we will separate ourselves from the balance of managers out there. The average draw down is actually low on trades. From what I see, there are a ton of tire kickers simulating and not investing with managers. Quit simply we have not been on the site very long. Patience is very important. Trades do come in clusters and with a small account managing the leverage and position size is considered.

The Avg. Daily Max Leverage has been 4.9

No problem with your average leverage but most systems don’t blow up during average times.

Your max leverage shows how much risk you’re willing to take - usually when a trade isn’t going your way. At 18x, a small 3% sell off would wipe out half a person’s account. For me, it would take a leader with a very long track record before I would trust them with that much leverage. Way too much risk for me but there are lots of people on C2 that are attracted to that.

That’s futures. I know the trade you are referencing and it never got away from me. It was a short Micro NQ trade that i kept putting on and taking partials off and leaving overnights on, Yet I still made money on the trade. I have been doing this for a very long time. I traded for one of the best ES, NQ traders in the business who was in the book “Market Wizards” Most of the trades we have on have less than 1% draw down, so the precision is there. Im actually not a very big risk taker at all, but trades come in clusters at times, and at the time of the short NQ Micro i believe I also had on a crude trade so the notional leverage was higher than what might be normal. Money Mgmt.is key, and preservation of Capital is important but if you dont understand the futures Mkt. and the leverage it brings this may not be for you. Something has to be said for almost 90% of trades put on being winners. I can also assure you that this is no average time…zero volatility, lowest Vix we have seen in years, and Fed pumping the system to a sum in excess of what we saw in 2007. Thanks

Definitely number 8, and then pray for war to cover your short position

Clearly everyone is a genius in a Mkt like this

BR, at least your wins are still over 83%, that’s something, and with leverage up to almost 10% average this could really recover fast.

Not surprised when there is averaging down logic used in a strategy. We have had hundreds of averaging down strategies in C2 and not many (if any) have survived.

And a whole lot of hubris.