Good Afternoon,
My name is Benjamin and I would like to briefly announce that after a year of closed doors trading, our strategy Honey Growth Fund has finally been made public. Since inception on April 5, 2018 we have returned over 12,000% cumulatively and at the end Q1 2019 we generated 40% returns. Our strategy primarily trades options, but also stocks hedged with options.

If you would like to read the full disclaimer, risk guidelines, and trading tools utilized, you can do so at: www.Honey.Investments

Would you be so kind and explain what methods do you use to manage and trade 3000 options on stocks like SQ and HAL. And is that repicable by followers?

SQ was set up as a long calendar spread with the long end in January and the short end being written weekly. HAL on the other hand was a modified Butterfly Spread - a setup we call a Bumblebee Spread. That position was recently closed and replaced by WLL - which is another calendar spread. All of these trades are replicable for subscribers, assuming they have level 4 option approval.

Have you been on C2 since April 2018 or did you use broker import or something like that to build the track record? Or did you start in April 2018 and keep it private until now? I am just shocked that you have no subscribers yet. At least it looks like you don’t. Do you have any autotraders yet? It just seems too good to be true and well…I am skeptical that subscribing would give me similar results. Besides with your account value of 20 million dollars, I would have to have $200,000 just to follow at a 1% scale so I just can’t personally. If you have a version of your strategy that is smaller you may have more luck getting subs like me that have accounts with much smaller balances, but that may not interest you if you are making that much money yourself anyway.

We have been on C2 since March of 2018 testing their system, features, and limitations. Honey Growth Fund is currently our only strategy you can subscribe to at the moment. We wanted to build a solid 1 year track record before going public with the strategy, hence why we have no subscribers yet as we just went live. We wanted to set a basis of trust for our fund. Given the fact it now has roughly 20 million, auto trading for many will be out of the realm of possibly. However, manual entering a resized position by the subscriber, would still carry the same risk/reward profile as structured on our trades - this is just one of the limitations of C2. We would also like to mention we do not have a 12,000%+ target in mind for this year. The estimate for 2019 that we have collectively agreed up is much more reserved (and we are on track), as it is difficult to move this much capital around effectively.

With that being said, we would consider offering another scaled down system, for smaller accounts if there was enough interest for such an offering. It would provided the exact same trades, just at about 1/10 - 1/20 the size. We would need to see at least 25-35 people interested in a scaled version for it to be worth while to put forth. Our goal for releasing our Honey Growth Fund was not so much to garner dozens of subscribers, but to raise awareness for our small fund. Our investor team has registered advisors and has larger long term goals than just a subscription based model. With all of that being said, we would like to benefit the C2 community in whatever way we can.

I think @SmartWolf was more interested in the liquidity of these options. Long 24,000 calls of WLL for instance in March.

Kudos for staying here a year and your success. But with options systems like these I’d like to see real money results that confirm the underlying liquidity of the options before getting excited about anything.

Good luck to the first subscribers…

@Honey_Investments I would also like to know how you can go short and long out of the money options with thousands of contracts when liquidity would be an issue.

If you had say 100 clients that would make it 100 times harder to fill the orders. I don’t see how you can get the order filled. I guess these are all simulated trades and not broker filled trades?

We have moved our core positions over to mega-caps such as AAPL, AMZN, WMT, etc. where thousands if not 10s of thousands of contracts trade a day. In our money account, we have had no trouble moving hundreds if not thousands of contracts on a weekly and monthly basis - just as we do on C2. However, now that there is 20m at play, we’ve had to make changes over the past few months to gravitate towards high liquidity markets. You can see this with the core positions on mega-cap stocks only sit at 1150-3000 contracts. There’s more money in the trade which equates to a lower contract count. With the addition of subscribers, we are not anticipating another 20m worth of capital to be dissolved into the same trades. The maximum we expect is 5-7m, and that’s a reach goal in our mind for the C2 population. However, if the sum of our fund capital + subscriber backings exceeds the market liquidity for a particular option, we will have to make adjustments to the core portfolio or cap the subscriber limit. But realistically, we do not see that happening in the modeling we have done. The goal of any fund is to increase returns while limiting the downside. While 2018 was an explosive year, it is not repeatable with a 20m account. So going through 2019, we anticipate a proportionally smaller return than last year, just by merit of running into saturated option spaces. So with our move towards super liquid mega-cap markets, price actions are generally much tighter, so smaller percentage returns, but less risk of over saturation. As our fund capital increases and ideally the C2 audience partakes in our trades, we could also see the addition of outright share purchases to absorb excess cash - but we are not at that place at the moment.

what about the bid/ask game you played with netflix with 2 minute left till market close, selling at $3 buying at 0.05 with huge numbers

Easier to invest 100k of your own money and turn into 20 million after a year? I wouldn’t bother making $5k a month here on c2

That position, as well as several others were a result of pricing inefficiencies that were picked up on our scanners. No other opportunities has arisen the past few months, though we have continued to look for additional set ups. In its place we have also been searching for traditional long and short box spreads to allow for more frequent arbitrage opportunities.

As mentioned above, the main goal of publishing on C2 is building a public track record to grow our current recognition. While we want to benefit the C2 community in any ways we can, we are not seeking vast subscriber adoptions. Our full time job is investing and in no way are we relying on any income that may or may not be generated through C2.

@C2player great catch.
I also noticed a couple others now that you mention it:

-11/23/18 Bought OTM URI Calls that expired within 10 minutes and were $2 out of the money (worthless) for $0.05 and sold them within seconds to “someone” for $1.45. That makes no sense whatsoever. That is a C2 bid/ask glitch if you ask me. No investor would buy 10k or 30k calls when they expire out of the money with 10 minutes to go for that price.
These trades netted $5.5 million.

While many of his trades seem legit, there is an awful lot of this stuff buried in here, which I would guess would never have happened if it was a TOS account with real money.

I will be very curious how this performs with any real money chasing it.

Yes…it will be very interesting to see this traded with a live account since trades like the WLL options seem quite impossible to fill as the typical size traded in less than 15 contracts on most strikes and the open interest is at most a few hundred down to less than a hundred contracts on some other strikes.

Also, for a ‘fund’ that trades millions in capital and makes millions per trade what would they be doing here charging $275/month?

I would suspect the average sub will not be able to scale down enough to follow this at all.

The way C2 is structured as we have found, is that it automatically fills total contract applied. There was indeed miss pricing that netted a substantial return on our live accounts - hundreds of contracts on multiple instances mainly centered around earnings, trade news, and other economic influences - likely a results of incorrectly entered amounts, margin calls, simple cases of being in the wrong side of the fence, and more. The position of the Growth Fund was only scaled to fit accordingly to match the accounts we were trading in. So wether 1000’s of contracts could have cleared, we have no way of knowing as we only moved several hundred at the time as was the capability within our accounts - so every time a lot cleared on our end, we scaled it to fit the fund until no more cleared on our live accounts. The next time our software picks up on a pricing discrepancy, we will be sure to post it here first, so those who wish to check the validity of high outside C2 contract counts, may be free to do so.

Can you, since stated trading was on live accounts, show account statements?

I, of course, would never ask for that, but when you said you have all those live trades, am really interested to see them.

Thank you in advance 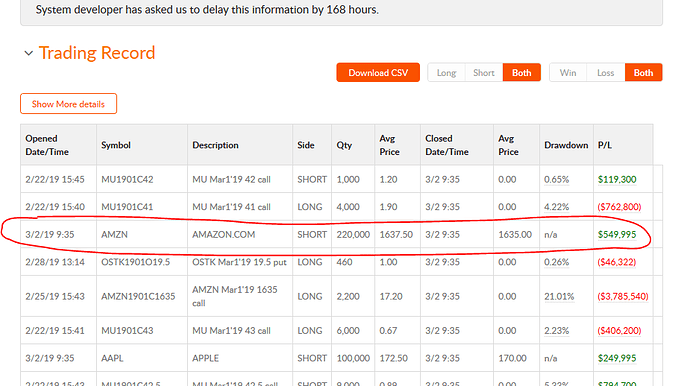 Those are probably offsetting option expirations. Obviously the quantities are wacked, but the Saturday trading is just a result of how C2 handles in-the-money options expirations (i.e. on Saturdays).

Thanks Matthew, that makes more sense, especially when you look at the detailed trades (ignore the OSTK trade, just the other two): 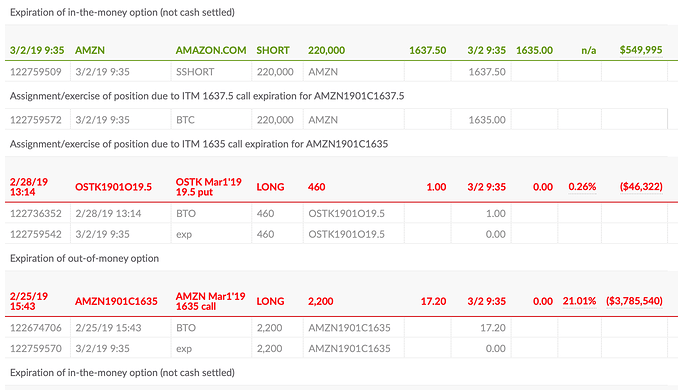 Ok, thanks for the explanation. That should answer DogZebra_Investing’s concerns about Saturday trading as well.