I’ve been working for a few months on getting a system together using Seetu. There have been some pretty big bumps along the way, but Collective2 has been hanging in there and working with me on support issues. Though I still can’t control a couple things as directly as I’d like in Seetu, I believe I may have enough of a start on it to begin tracking the results.

The system takes long positions on 30 minute bars across about 100 of the largest, most active stocks. Trades last for up to 30 bars or so (2.5 days), but the average bars held will be a good bit lower.

Anyway, no promises, though I’ve tried to build a system with great (and extremely thorough) backtest results, and made every effort to avoid curve fitting. Let’s see how Seetu does driving it! 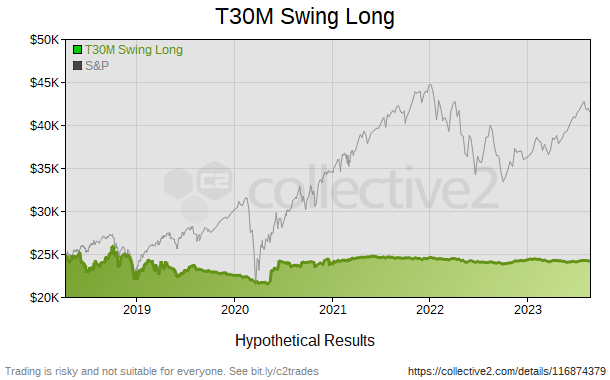 Some great news from the folks at Collective2 last night. They are in process to implement a key feature in Seetu. Right now, the Max Open Positions setting for a Seetu strategy works for backtesting, but doesn’t cap the number of trades entered in actual trading. They hope to have that implemented in a week or two.

That’s going to allow me to much more closely mirror my backtested approach in T30M Swing Long.