ANY CALENDAR MONTH THIS STRATEGY DOES NOT RETURN POSITIVE ROI (as reported by C2) CURRENT SUBSCRIBERS WILL GET THEIR NEXT MONTH FREE.

This strategy was generated using genetic algorithm AI to discover correlation between S&P 500 price movement and the CBOE Volatility Index (VIX). It utilizes fuzzy logic and opens a position only when a convergence of technical indicator values result in an acceptable trade setup, and then calculates aggressive take profit exits, ideal for volatile markets with frequent sentiment-driven intraday reversals that destroy most day-trading strategies. The manager has traded this strategy live since May 2022 with their own funds through their broker.

ALL RECORDED TRADES IN TRADE RECORD ARE LIVE TRADES IN THE MANAGER’S OWN ACCOUNT. In other words, I’m trading MY money with this strategy, not just yours. C2 trade signals are generated by mirroring the trades in my live Interactive Brokers account.

This strategy is a new version of my original “E-Micro Swing Scalper” that has been modified to work within C2’s framework. You can see previous discussion threads here and here.

Also, I submitted a new strategy description for it earlier this week. When I checked with C2 yesterday as to why it has not been updated yet: “Our compliance person approving descriptions is down with the flu. Please give us a couple more days to review your submissions.”

I’m still testing that C2 broadcasts trades correctly with my setup, but so far, so good.

This strategy has already paid for itself since yesterday.

If you have a question that is not specific to you, please post it here, as the answer may help others as well!

I’ve received a handful of questions already via private message, which I have been happy to answer and will continue to answer, but I’ve had recurring variations of two questions:

#1: Is your (self-reported) ROI based on trade balance or starting portfolio balance?

The ROI and Drawdown values I report are based on the starting portfolio balance, not the trade balance. As the cash margin requirement to trade one S&P E-Mini contract is around $13K currently (at IB at least), both ROI and Max DD would be MUCH higher if reporting on a trade balance of $13K. This trading is intended for a $50K balance, so all values are reported assuming a $50K starting portfolio balance.

While not exact to the dollar as the strategy is tuned every weekend, here is a one year backtest of the current iteration I’m running: 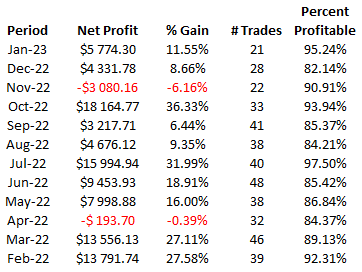 #2: Drawdown questions: how much, how often, are you in one currently…

The max historical drawdown was right about 26%, which would be about $13K on a $50K starting portfolio balance. I’ve actually been trading much more than $50K on this strategy, so my drawdown was quite a bit more than $13K when it happened :).

We are currently not in a drawdown. I had that 26% drawdown in early November, and while it started recovering through the rest of the month, it did not fully recover that 26% until mid-December. Since then, the worst drawdown was about -14% in early January, which we have more than recovered from, and are up just over 10% for the month currently.

Futures contracts are highly leveraged instruments. This strategy has double-digit drawdowns almost monthly, usually an open position that it holds until recovering (it does use stop losses as well). YOU NEED TO BE OK WITH PERIODIC DOUBLE DIGIT DRAWDOWNS, or this is not the right strategy for you. It’s easy to say, but hard to live through, I know, since I’m trading this right along with anyone else.

The chart below should help to understand the frequency and depth of drawdown (at least historically). While this chart and backtesting reflect an astronomical 200% gain in the worst year for the market since 2008, it also reflects regular drawdowns of 10% or more, and several drawdowns >20%: 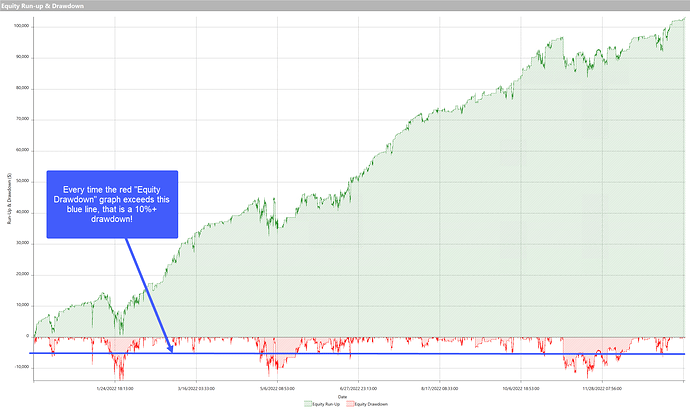 Two more questions received: #1: Does this strat use stop losses, and #2: are exit targets static or dynamic?

The answers are Yes and Dynamic.

Here’s an example of both just now thanks to earnings call week volatility.

As a side note, I’m definitely NOT a fan of quarterly earnings calls week, especially when big tech reports. If you’re algo trading using technical indicators, having an open position when a big earnings call hits is a complete coin flip as to which will be hit first when the market inevitably knee-jerks: your take profit exit or your stop loss exit. The only reason I don’t sit in cash every big tech earnings week is that, historically, the strategy is either already in cash or takes profit more times than not.

As you can see below (screenshots from my IB account that is broadcast here), pre-Microsoft earnings call today our open short position was still in good shape and heading the right direction, well below our stop loss of 4054.00 at 2:45pm CST: 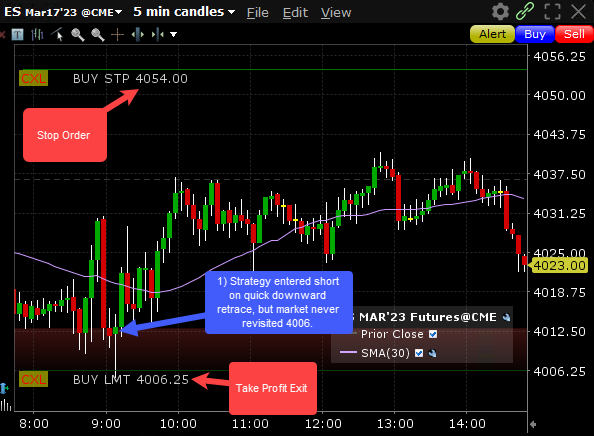 Then, in the last few minutes leading up to and at 3PM CST when Microsoft released their earnings and forecast, the market shot up, touching 4047.75 before settling (for the moment) around 4042, and fortunately, not taking out our stop loss: 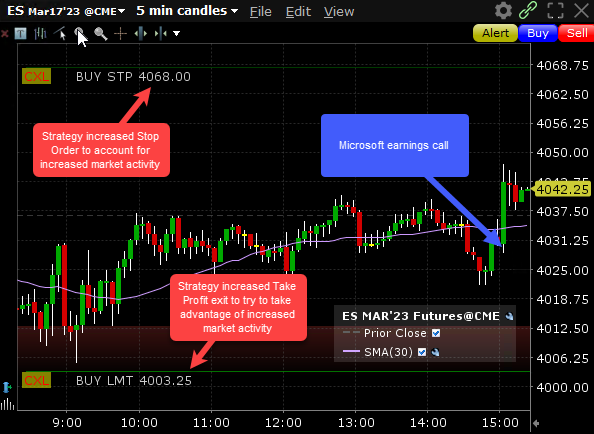 You’ll notice that the strategy dynamically adjusts its take profit and stop loss targets based on recent volatility, volume, etc. In this case, increasing both in the minutes leading up to the earnings call. The strategy doesn’t know there’s an earnings call, only that there’s increased market activity.

Like I said, historically, this strategy is either in cash or on the right side of an earnings call market spasm more times than not, but we’ll see what happens with this one. After 16 straight winning trades, we’re kind of due for a losing trade, but I’m always happy NOT to have one…

You can see here, not 20 minutes from my last screenshot above, the strategy is already reeling in the stop loss and take profit targets as market volatility has subsided: 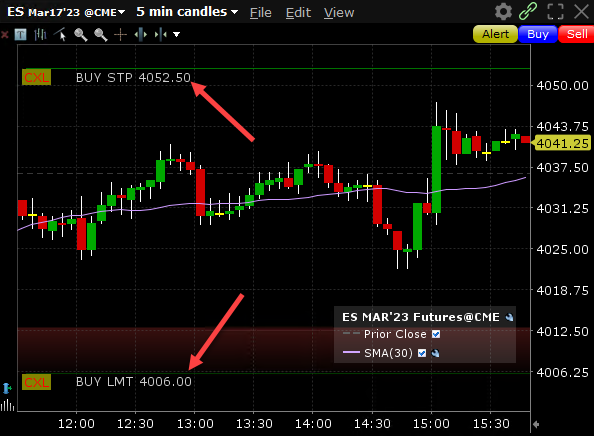 This morning this strategy stopped out of a short position for about a 7.7% portfolio loss, after BARELY missing its take profit exit before the entire market reversed yesterday and followed Tesla’s irrational 6%+ upswing through the day prior to its earnings call after the bell. Why the market was FOMOing in all day before the Tesla call when there has been NOTHING good in the news about Tesla OR Elon Musk is beyond me, but then again, when has Tesla stock valuation EVER been rational… 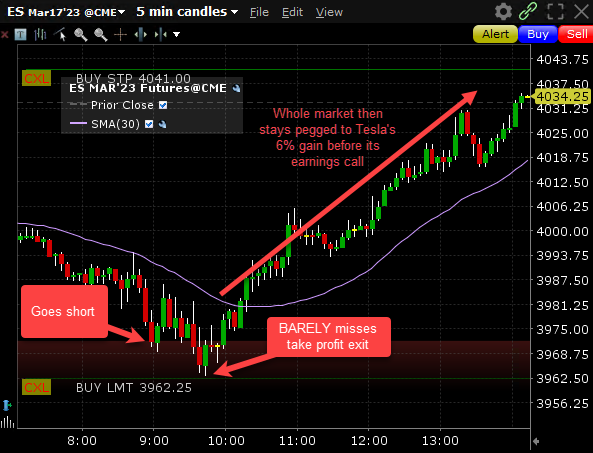 As you can see, the market was literally pegged to Tesla’s price movement all day:

As I’ve mentioned previously, I’m not a fan of algo trading during the two weeks of quarterly earning calls, simply because having an open position during a big earnings report, especially a tech giant, is a complete coin flip as to whether you’ll take profit or stop out, depending on what direction the market spasms first. But historically, this strategy is either in cash or in the right position more times than not, so we continue to trade through earnings calls. However, on days like today when it BARELY misses a take profit exit and then rides earnings call FOMO into the ditch, it’s easy to second guess even participating in the market these two weeks.

Periodic 5-10% drawdowns are a normal part of this strategy’s performance, which is easy to say but harder to live through, but I’ll continue to be transparent about the good AND bad days.

It’s no fun to start a new strategy as a strategy manager with a drawdown, and the same of course is true for new subscribers, but this drawdown is WELL within expected and historical performance. Just a disappointing start for sure.

After today’s loss this strategy is still up about 6.4% for January (obviously not on C2 as trades weren’t captured here until Jan 19).

I’ve found this to be also true with my trading. Earnings is a wildcard, but through it all, if you have positive expectation, it’s ok. It just is very volatile! And that cost (volatility) can be worth the gains.

With a loss this week, I decided to go back and look at backtested weekly results back to January 2020, specifically looking at the two biggest earnings weeks per calendar quarter, to make sure the data supports my assertion that it’s better to stay in the market with this strategy during Big Tech earnings weeks: 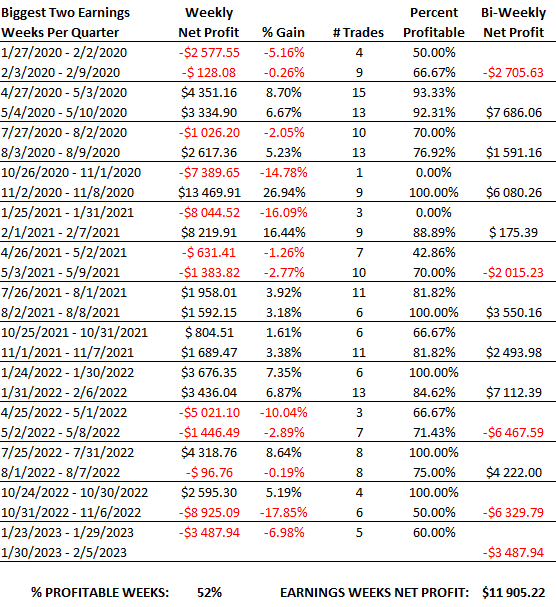 A couple of observations:

So I believe the macro view of this data supports staying in during earnings weeks, BUT given recent performance (negative ROI in 5 of 7 weeks), the micro views supports either sitting out or at least reducing position size during the two weeks of scheduled chaos every quarter.

Looking at this data, what are your thoughts?

Looking at this data, what are your thoughts?

no amount of going back and forth you do fine-tuning the strategy, I think the problem lies somewhere else -

no amount of going back and forth you do fine-tuning the strategy, I think the problem lies somewhere else -

That is exactly why the strategy sees 5-10% drawdowns several times a month, sometimes approaching 20%. That is also why this strategy is definitely not for everyone.

My question was this: at what point would you reduce (or sit out) your position if you identified recurring scheduled events (CPI data release, earnings reports…) that reduced the effectiveness of your strategy, BUT it was still profitable over the longer term?