The Kamishiro shows that it’s been trading since December 2019. In particular; Apr, May, Jun, and Jul 2020 have all been profitable.

The trading record, however, only shows trades from December 2019. Unless it has held a trade open since December, which has been profitable most of these past 7 months, how is this possible? How long are its trade results delayed?

This strategy was recommended to me by Easy-Switch, which in itself seems odd given the 50% draw-down and incomplete stats.

The trading record shows 5 trades but there are 7 trades (total) according to the stats, so 2 trades are still in progress.

Two trades are still open, and have been for a while.

So, sadly, we cannot view maximum draw-down on open trades that are held for so long. I’m curious if this recommended strategy has been enduring unreasonable (self-defined) draw-downs in order to persist the trade, or adjusting its open basis using Martingale. If I used your query language, would this be identified? I’m guessing the answer is no, but… perhaps, in the case of strategies which trade multiple symbols, the result set could anonymize the symbol (and prices) but still return the data (i.e., percentages, draw-down, etc).

This isn’t very important to me at all, and I’m bringing it up only because Easy-Switch prodded me.

C2 is saying I only have 7 trades since 30 Dec 2019 because it only counts a full trade once entire position is liquidated.

I in fact made some trades earlier this month. Since I did not liquidate entire position, C2 does not count it as a full trade. This is outlined in my Strategy description. If you are subscribed, and go into “Show auto trade data” you will be able to see the trades I have made that C2 is not counting. Picture attached. 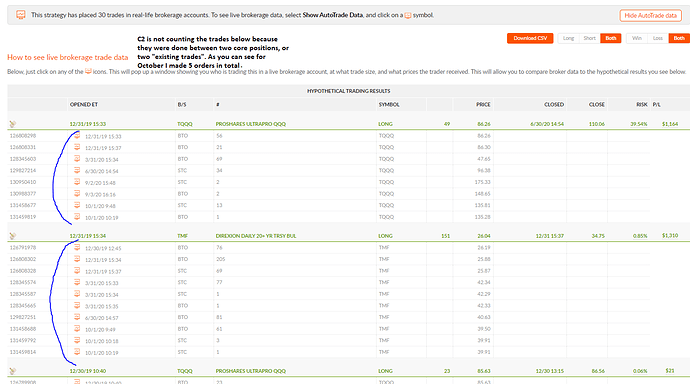 Apologies for not addressing this sooner. I am not a marketer, and do not like self advertisement. I simply have found a way to manage my own money for growth, and if people see value and would like to join in on that, then they are welcome to. I would like to focus on that. Again since I keep core positions open, if you subscribe you will have to join open trades. This is outlined in my description.

As far as if this is a good time to subscribe, I honestly can’t say. My back testing shows an average CAGR of 42%, with the system being up 105% for the year at time of writing, I can only conclude that within the next few years something could happen to even it out. I am however quite pleased with the risk adjusted returns so far. A 55% draw down, but 105% gain to me is acceptable, especially since there was no chance of a margin call as I am using a cash account for this. compared to SPY which had a 30% drawdown, and is only up around 8% if you had just invested in that at the same time my
system started. It depends on what sort of risk adjusted returns you think are acceptable. So far the only people who have lost money with me are people looking to get rich quick and eagerly jump in and out. Hopefully this clears some things up, for your consideration.