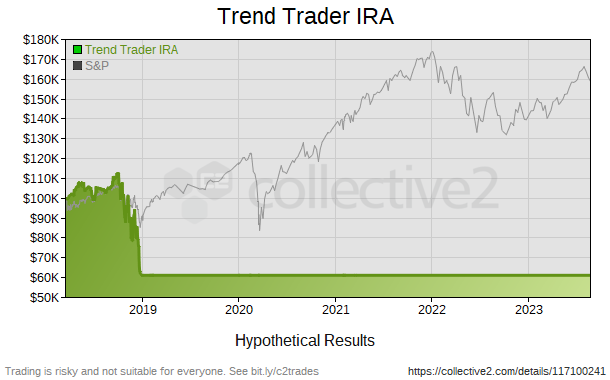 This is an introduction to my Trend Trader IRA strategy wihich is fully discretionary that trades ETFs and ETF options. I am trading this strategy in my personal IRA account on ETrade. Here is the free coupon for those interested:

This is a trend following strategy based on technical analysis and indicators such as RSI, Bollinger Bands, Keltner Channels, ADX, Support/Resistance zones etc. as well as sector correlations and seasonality. I analyze and scan all markets and sectors daily and I trade only very liquid ETFs and options so there should be very low slippage problems. Strategy can be traded manually if you are available to take your trades near the market closing time. Most signals will be generated within the last 1 hour before markets close (3 pm-4 pm EST). Otherwise, I recommend autotrading.

I personally trade this strategy in my own IRA account but cannot obtain TOS because I have a different brokerage and don’t want to switch to IB. Disciplined position sizing and strict risk management (stop loss, profit targets) are always in place for each trade. To avoid risk and over-leverage, at least 50%-60% of the portfolio will always be in cash.

This strategy can be replicated with an account size of as small as $20k. 2-3 or more trades per week should be expected. I may leg in to the same position 2 more times for a maximum of 10% position size for ETFs and 5% position size for options. However, please note that C2 puts second/third entries to the same position as 1 trade so trade number may seem different. Check autotrade data for accurate trade history. Trades may stay open anywhere between 1 day - 2 weeks. We do not leg in to every position if it breaches certain indicators we have set or if it hits our stop loss.

The objective of the strategy is to get 2% or above average monthly portfolio growth (on a $100k portfolio) with minimal risk and drawdown, but, as always, this is a hypothetical goal and nothing can be guaranteed.

If you would like to see how I take my trades live, you may use the free 1 month coupon above.

Thanks for reading my post and let me know if you have any questions.

What about your other two strategies that crashed and burned and are now “private”? Did you also trade those with your own money?
Asking for a friend.

No those were trial futures strategies that I was testing for the first time to see if similar approach would work on futures. Apparently it does not so I decided to stick to my ETF and Options strategy that I have already been doing for a while.

This is a 1 month follow up on my strategy. We have met and exceeded our 2%+ average monthly return goal with minimal drawdown. We were able to achieve this despite high volatility during the last 30 days and we did this by using less than 25% of our entire portfolio. Very minimal risk, minimal drawdown and much higher return than overall market (SPY).

Just a reminder that our model portfolio is $100k but we always keep more than half of the portfolio in cash to minimize risk. Someone who has less capital can still trade our strategy at 100% and get 3-4x times of our return but you will also have 3-4x of our risk/DD. So, depending on your portfolio size, your return in this strategy could have been 10%+ for this past 1 month period.

I am willing to offer 1 month free coupon to any new subscriber interested in joining. Anyone interested can send me a direct message. You may also reach out to some of my current subscribers to ask about their experience so far and my daily broadcasts.

Disclaimer: Past performance is not a guarantee of future results.

Here is the 1 month free coupon for new subscribers UGUR84873 who would like to observe my trades and daily broadcasts. This expires on April 30th.

Also, based on current subscriber suggestions, we have reduced the subscription fee until we establish some more track record. Anyone who joins at the current rate will be grandfathered at this price permanently.

Let me know if you have any questions.

Just a reminder that 1 month free coupon expires in 3 days and this will be the last free month coupon. Strategy is doing well so far and exceeded 2 month return goal already despite direction-less choppy market. C2 has recently generated key ratio numbers for our strategy:

ETF and Options fill prices so far for current Autotraders are pretty good and no slippage issues were observed. All entry and exit orders are entered with limit orders. In case we start seeing slippage issues, we will cap number of subscribers.

Looks good so far, any backtesting?

This is a discretionary strategy and there is no backtesting. However, this strategy has been used since 2011 and partial trade history is available. Send me your email via private message and I can share it with you.

We do not leg in to every position if it breaches certain indicators we have set or if it hits our stop loss.

But here’s the first problem: Really, there was a stop loss?? If so, it must have been steep since TQQQ dropped by -8%, then to -13%, then to -18% before finally getting out.

And the second problem: Really, no breach of “certain indicators”?? How in the world were those trend indicators not flashing “FALLING” during a -18% drop? Granted, TQQQ is 3x leveraged, but all the more reason to watch it like a hawk. Part of this, I suppose was that he saw up-trend indicators on March 19, because not only did he BTO 150% more in this trade, but he opened four other bullish trades within minutes, all four of which were sold as winning trades on March 21, near a local high. Unfortunately, while he could have closed this trade at that time (Mar 21) as well, at a very modest -2% loss, he did not, hoping against certain indicators that it would recover further. It did not.

[I suspect a reluctance to stop out a losing trade. It’s understandable, psychologically, but shouldn’t be for a trader. [Read this article to understand why](https://medium.com/@laurentbernut/the-psychology-of-stop-loss-cd4d3908887a). ]

Not true Martingale (doubling down, 200% trade size increase), but a serious run toward Martingale, with an increase of 150% followed by another 100%. On some trades he has indeed doubled down. Fortunately, so far he has never added onto a losing trade more than twice (open, add, add). I hope he keeps to this approach, for safety’s sake.

On the plus side:
I will say this, so far @Trend_Trader is showing restraint with his position sizes, allowing mostly modest gains to make progress while mostly exposing the portfolio to modest risks.

I will also say that he does not simply buy more as a trade falls, but clearly waits until the fallen trade has indicators showing an upward trend is nigh. Example 1 is the trade described above, where the first trade add-on was accompanied by three other long trades at that time. Example 2 is also the TQQQ trade above, but on the second add-on (Mar 22), where he also launched another bullish trade (long SPY calls). Both trades were down by the next day, where he closed this trade at a loss, but doubled down on the long calls (going from 2 to 6 at a roughly -40% trade drawdown), which recovered back nicely by Mar 27. That was his biggest winning trade at the time, returning ~$1k to offset the -$985 loss from the TQQQ trade. In fact, the options trades here have contributed most of the winnings to date.

To sum, the upside here seems to be decent discretionary trades on leveraged funds and liquid options with thoughtful position sizing. The downside is that heavily buying into losing trades can end poorly. My rhetorical questions about stop-losses targets and breaching of trend indicators are less important than these observations, but may give insight into trading temperament .

@v1Trader Thanks for the thorough insight into my trades. Our stop loss is at 10% when the position is opened. We adjust the stop loss after the 2nd leg is added to reflect 10% from the new cost basis. When and if we add the 3rd leg, we do not move the stop loss any more. We used to adjust after the 3rd leg as well but modified it based on subscriber feedback. I am always open to feedback on improving the risk profile of the strategy but not the opposite (ex. I will not increase my position size allocation).

I invite anyone interested to use the free month coupon above to see my daily broadcast every night where I explain why we added/held/sold a position with justification. I also mention other entry alerts that I have ignored and why. Current subscribers may also chip in here to share their experience so far.

Note: That TQQQ trade you mentioned did not breach the main indicator we were watching. It just hit our final stop loss after adding 3rd leg. These type of trades are rare but may happen in the future again. If you all recall, it happened when the Facebook scandal broke out and it was a black swan event for Nasdaq. Hard to avoid or time those type of events. We just followed our strategy rules.

@GonzaloLoayza2 Thanks for your input. Our risk management is a combination of stop losses, position sizing/trade allocation, capping the number of concurrent positions, choosing limited number of high probability setups combining multiple supporting indicators and not legging in until certain criteria is met.

Since we only trade ETFs, not individual stocks, situations where stop losses don’t work will only be during black swan events such as Brexit or major market crash, which are very rare. But, yes, it is a possibility and we do not deny that. Anyone who invests in an overnight position must be aware of this risk.

Thanks for your answer. It seems to me that the combination of elements that you mention constitute good risk management. I have seen that in the first 44 days, your model has shown a low correlation with the SP-500. If this is the behavior of your strategy in the medium term, my only suggestion is to take into account the R-square and the generation of Alpha. I hope you have a lot of success with your strategy.
Best,
Gonzalo

I have been following IRA Friendly Strategy almost from inception. For my personal interests I liked the way the strategy was set to trade. I received the nightly updates on the trades and reasoning going into them, which is a big help in understanding the traders logic. After following about a month I felt comfortable with the reasoning and risk level and started taking the trades. In my opinion, a huge upside to this strategy is the use of many different indexes that can take advantage of long and short trends using long Etf’s and long options. No strategy is perfect for everyone but if you like daily explanations for the trades and so far low risk this is something you may want to keep an eye on.