Welcome to my strategy called GreedAndFear, started in 2017. Of course, this is a not-so-subtle way to bring it to the readers attention

But also ask for input from potential investors and co-trade leaders. First a quick chart: 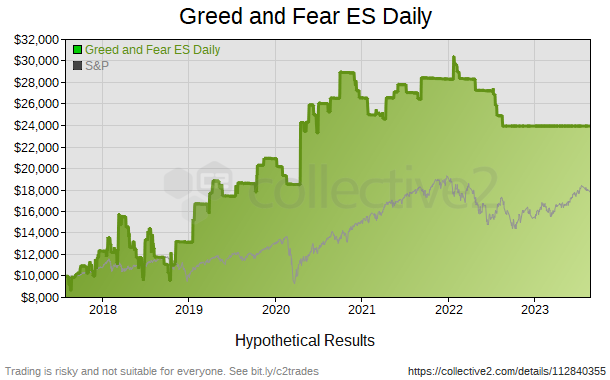 As an investor or trade leader, what do you consider the good and bad about the current results and statistics? The max drawdown really hurts of course. Also, the Sharpe ratio is a bit low in my opinion.

Getting a TOS badge is something worth considering, but I decided to build a reasonable track record first.

Criticism is welcomed, so don’t hold back.

Are you a swing trader since you hold trades for several days? You have a pretty huge drawdown% at 46.6% but at least you don’t add to losing positions.

A position can run for multiple days if the signal stays te same but is always closed before the weekend.

That max dd is ugly, I know. It was in the relative beginning, but it will stay there.

Criticism is welcomed, so don’t hold back.

I like systems like this and wish there were more but keep in mind that you are competing with a similar system which started 3/11/2019 and to date has a 76.2% CAGR with drawdown of only 17.4%.

Anyway, I wish you good luck.

Thanks KarlA for responding! Could you include the name of that strategy for comparison?

The max dd is a ‘nasty’ statistic, because you can never improve on it. At the same time, I must admit that it could happen again. Not in just one bad trade (impossible with the stop loss), but in several losing trades in a row, like it happened back then. That almost never happens, but we all know the validity of ‘almost never’

For the same time span your are doing not so bad with an actually lower drawdown, thought I had to add this to my previous post.

I don’t want to promote any systems here but since you ask the name is STOCK MARKET SWINGER and BTW it is free.

I don’t want to promote any systems here but since you ask the name is STOCK MARKET SWINGER and BTW it is free.

Found it, thanks, added to my watchlist. It no longer seems to free though. Increasing the subscription fee will adjust all historical returns.

I think it’s ok to have a high drawdown if return is also exquisitely high and you make it clear from the get go that dd. will be high, otherwise your system will be considered a failure. I have 3 systems with different risk tolerances for everyone. What will probably happen is your system will be lost in the mix of systems with better risk/reward profiles.

different risk tolerances for everyone. What will probably happen is your system will be lost in the mix of systems with better risk/reward profiles.

That’s exactly what I think is happening. The only thing I can do is improve on other statistics and hopefully outlive the more riskier strategies. But I will forever fail the max dd selection.

The month of June was a tough one for the Greed and Fear model portfolio. The neural network made a lot of false predictions. It wanted to go short for most of the month, but that didn’t work out too well since the S&P 500 rallied most of the time. And the occasional long signal also turned out false.

There were three long trades, all three losing trades. One was stopped out overnight after some Twitter messages, where the futures suddenly dropped 50 points and then quickly recovered. The other two trades went almost directly from entry to stop loss after which prices continued to fall to close 5% lower on the day. That’s why having a fixed stop loss in place is so extremely important.

That’s just the nature of trading, you can do everything right and still lose money. Luckily July started off great, but that’s for next month’s look back.

July and August were good months. In total only 3 trades, 2 winning, 1 losing trade. What you can not see in the stats is the missed trades. In August I had several trades set up, but they were never filled as the ES just took off on those days. On average it’s reasonable to expect a minor intra day pullback before getting in a position (long scenario).

Just one trade for September, and on the last day. From what I’ve read here, it looks like investors sometimes like to see action, so at least a couple of trades per week. While in my case, trading less just seems to work well. That is why I even have investors that are simply subscribed to my email service, instead of configuring the autotrading plan and all. Collective2 serves as an independent party recording trading statistics.

My sharpe ratio however does not want to move higher, or so it seems

PS. Just the other day, my YTD for 2018 suddenly seems to be dropped/disappeared. Contacted the helpdesk about this.

Congrats on your success.

Curious, is your strategy automated, and if so, would it work on smaller timeframes & trade more often for smaller gains/losses with a similar success rate (I assume you use longer timeframes).

Well done sticking with one contract with SL/TP.

Thanks. The analysis is fully mechanical, order entering is still manual. The bracket order is a great order type to guard the position for either a loss or take profit at the pre-determined level. The analysis is done on daily data, so the order also has only one chance per day.

I am working on a fully automated system to make multiple trades per day without my intervention.

Makes sense.
Whatever your system looks for you could try on hourly bars and just manually do it when you’re there. Always an option I guess. But then again not as consistent if you’re on vacation.