What happened in August hasn’t happened since 1989……

With only 1 day to go until the end of August trading, something interesting has happened in the market that hasn’t happened since 1989…July 1989 to be precise. We’ve only had 3 negative trading days in the S&P 500 in August, that’s out of 20 trading days so far this month. Not only has it been 31 years since this has occurred, it’s only happened 6 times since 1928.

Why is this relevant? Well, I’ll start with how this phenomenon affected Oak Spring Trading Results in August, but then I’ll elaborate on the potential broader impacts for everyone else. I’ll highlight our 3 key strategies that currently have subscribers, Orange, Blue and AI Rainbow. The basic premise behind all 3 strategies is to invest in a blend of long and short equity positions (no futures, options or FX) with the mix changing on a daily basis. Most of our funds are 85% - 100% invested daily and we don’t use any leverage. Here is the percentage dollar breakdown by position for each of these funds in August:

As expected, both our Orange and Blue funds had drawdowns for the month, but our AI Rainbow fund happened to squeeze out a modest gain of almost 2% while keeping the drawdown percentage to 2.1%. This isn’t too surprising given our AI Rainbow fund is our most diversified fund and it takes on roughly 20 – 25 positions daily and does a really good job of mitigating risk and drawdowns.
Given the Black Swan event in August, we feel quite positive moving forward that our performance should improve significantly in the months ahead, it may be a good time to subscribe.
As to the broader implications to both investors and strategy managers, it’s quite interesting. I didn’t do any deep dive analysis on any other strategies but my sense is that anyone who takes a 100% long position or a majority long position probably had a really, really good August, but August was not a normal month. Below is the distribution of negative trading days since 1993:

As we would expect, it’s a bell curve with 10 being the most frequent. 4 Negative days have only occurred twice in 27 years and never had we had anything lower then 4 (the last time was 1989).
I also did a deeper dive into those months since 1928 that followed a 3 or less negative days in a month event and I discovered some interesting insights. In the six instances of the month following a 3 day negative month, here is the number of negative days: 9, 13, 13, 5, 8, 10. That’s an average of 9.7, so basically, history would suggest a regression towards the mean in September. I also looked at the broader market over a longer term after such an event and I created a summary chart.

I drew three main conclusions from the analysis:
• Typically, the market still has some significant room to move up after an event like this, sometimes significantly before a bear market occurs
• We should expect to hit a peak in the next 6 – 12 months (typically)
• Once that happens, expect a significant bear market with drawdowns of 20% - 45%
.
If you’d like to check out my AI Rainbow Strategy, here is the link. Our mantra is capital preservation first, great returns second. 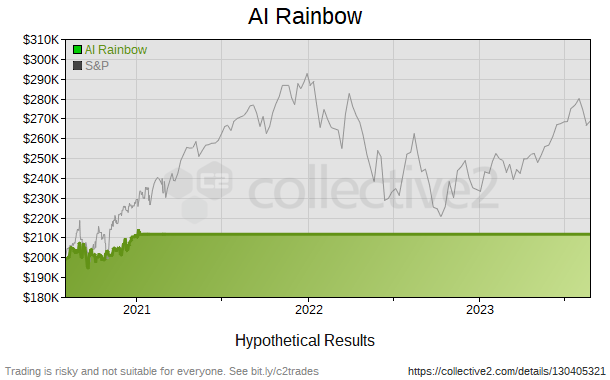 Hi Joe, you might try and contact C2 on that drawdown statistic as it shows an almost -30% drawdown. This could be an error or was that some kind of adjustment on a position?

Thanks, yes this should be fixed by Collective. The actual drawdown is currently 2.2%. It looks like Collective had a data glitch today and it artificially affected the reporting, but they have since fixed it and it should be accurately reflected.